"All of us can't stay in the [internment] camps until the end of the war. Some of us have to go to the front. Our record on the battlefield will determine when you will return and how you will be treated. I don't know if I'll make it back."

-- Technical Sergeant Abraham Ohama, Company "F"
442nd Regimental Combat Team, Killed in Action 10/20/1944
Since beginning work on my novel, Broken Dolls, (see synopsis), I have learned many new things, not only about the history of the internment of Japanese Americans, but also about the history of my own family. I always knew my mother and her family had been forced to sell their belongings before being relocated to Tule Lake Relocation Center. When Tule Lake became a high security segregation camp for those Japanese Americans deemed to be "disloyal," they were moved to Topaz Relocation Camp in Utah.
My grandparents were from Japan - Issei, first generation. Due to the Naturalization Act of 1790, they were not allowed to become American citizens. However, my mother and her siblings were born in the United States - Nissei, second generation. Therefore, they were citizens of this country when they were relocated to internment camps. 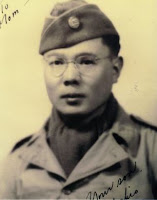 What I didn't realize until recently, was that my Uncle Yoshio - my mother's oldest brother - fought in the United States Army while his family was interned in these camps. He was a member of the 442nd Regimental Combat Team, composed entirely of Japanese American soldiers.  The 442nd became the most decorated unit in United States military history for its size and length of service.
442nd Regimental Combat Team Website

Even more amazing to me was something I learned just last week from my cousin, Uncle Yoshio's son: his dad, my uncle, my mother's brother, received the Bronze Star.

It's difficult for me to put into words how I feel when I think about these young men fighting - some even sacrificing their lives - for a country that put their families behind barbed wire. But, there were many stories like my uncle's. Many of these young Japanese Americans soldiers must have held the same sentiments Tech. Sgt. Ohama expressed in his words above:


"Our record on the battlefield will determine when you will return and how you will be treated."
This history is not something my mother or her family spoke about much. Perhaps many Japanese Americans are unnecessarily ashamed of this history, or it is too painful a period in their lives to re-live. Perhaps it is the philosophy of gaman - patience, endurance. Or, maybe it is the attitude of shikata ga nai - resigned acceptance.

I am Sansei, third generation. The more I have learned since beginning work on Broken Dolls, the more I realize this is history we should all remember. Most of all, I respect the honor and dignity of those who experienced it. 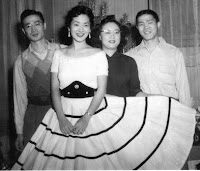 Jan Morrill
United States
Jan Morrill’s award-winning short stories and memoir essays have been published in the Chicken Soup for the Soul series of books and several anthologies. Recently, she was nominated for the Pushcart Prize for her short story "Xs and Os," which appeared in the Voices Anthology. Her two children grown, Jan lives on a farm her husband, two dogs and two cats -- that is, when she's not getting new story ideas while on a new adventure somewhere else in the world. For more information, visit her website at www.janmorrill.com.

Some of Jan's Favorite Websites and Blogs